Week 2 of my glacier adventures began with a briefing at Adventure Consultants HQ in Wanaka. With generally good weather ahead of us the plan was to drive to the west side of the Southern Alps and fly up on to Fox Glacier. Our destination, Pioneer Hut on Pioneer Ridge up at 2450m, (just above 8000ft). The original hut was completed in 1953 slightly higher up this exposed ridge but, unfortunately wiped out by a massive rock fall a few years later. Since then the hut has actually been moved twice and rebuilt in ‘safer’ locations. 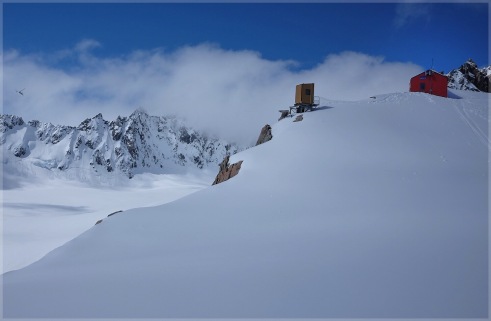 The above picture was taken from the toilet door, down the snowy ridge by 30m or so and hence the fixed rope. Going down there early in the morning or late at night after the snow has hardened to ice, is a bit of a challenge and with consequences if you slip. Walking down in booties isn’t to be recommended, as I was reminded the first time I ventured out down. 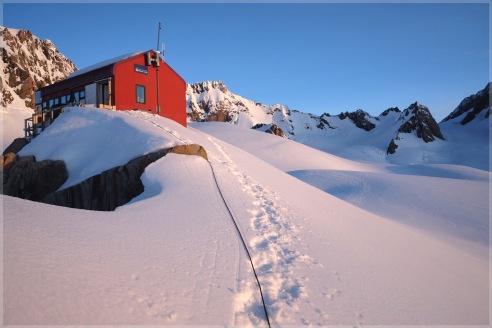 On the first full day of being up there we were blessed with an amazing day of fine clear weather. Nick, (my guide) and I discussed the objectives for the day and knowing conditions were perfect we set our sights on reaching Pioneer Pass then climbing up Grey Peak for a view over to the east, up the Tasman Glacier towards the ‘Kelvinator’ where I had stayed last week.  Quite a number of kilometers later, after 3+hours of skiing, traversing, a lot of skinning and finally some steep climbing on ice, (with crampons and axes), we summited Grey Peak. At 2882m (9455ft) it’s not the biggest in the area but high enough to provide a steep challenge and amazing views. The little time we had up there taking in the truly magnificent panorama will stay with me for a long time.

This one was taken from the summit of Grey Peak. To the far right is the Tasman Glacier.

After carefully retracing our steps back down to our skiis, we switched out of crampons back into skiis and begun the ski down and back to the hut. Sounds straight forward but with crevasses dotted all over the glacier this was anything but. There were plenty of steep slopes that needed some significant focus, with more amazing views. Combined with some tricky navigation around various large snow filled crevasses that looked fairly harmless but were certainly not. And lastly a skin up and over a steep, actually very steep, ridge using ski crampons with Nick shouting ‘every step counts, concentrate!!’ An hour later we finally made it back to the hut after what can only be described as an truly epic day. 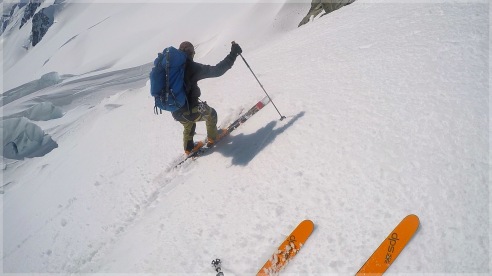