With the break over and still a long way to go, we set off again to enjoy a simply majestic ski down and towards the Chancellor Dome. Our ultimate destination was a hut at the very end of this ridge, another 1000m below us. This was where, if the weather held we’d hopefully get a ride off and back down to civilization.

It’s hard to do justice to this vast and beautiful landscape of ice. It’s almost like being on another planet or a film set, so perfect it’s hard to take in. With conditions so good Nick suggested we ditch the packs and skin back up a few kilometers to make the most of this part of the glacier. He knew I’d be up for it and we just about had time to squeeze this into the day. 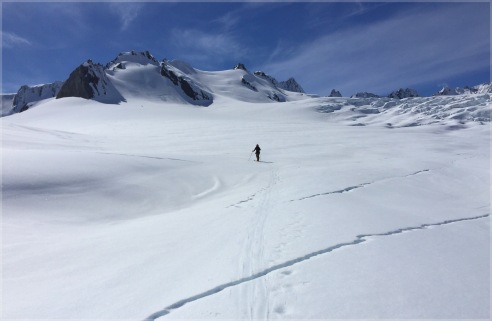 I didn’t notice the cracks skiing down this slope only minutes before. Now with skins back on and the pace back upwards much slower it was a reminder that whilst beautiful, we were on a glacier that’s ever changing and full of cracks!

With a second lap of the last 2kms of the glacier complete we collected our packs and set off once more. If it’s all like this it’ll be a breeze, I was thinking. But of course things were about to change. Having traversed to the left side of the Chancellor Dome and enjoyed long runs down wide and free slopes, the glacier had narrowed and we were much much closer to the maze of ice structures and crevasse. The flat open space became much steeper and with plenty of things around to avoid.

This section was steep and had very little run out, unless you wanted to be caught by a hole, so Nick made it clear that it would be best to side slide down a big chunk of this.

After this, the terrain got even narrower and the snow much softer, that was a clear signal that we were dropping elevation and getting close to the freezing level. I did slip over once on this lower soft section. Getting back up and over my skis with the 20kg pack on, was probably one of the hardest moments in the day. It must have looked hilarious, me flailing around, wriggling my legs and arms to move my body into a position where I could attempt to stand up.  I was beached for 30 seconds or more, huffing and puffing.

The path ahead funneled us into a gully which eventually led us to what appeared to be a dead end.

And that’s where we’ll start the final chapter of this epic last day’s journey.
Read on in Part 3.